Why is the free-will question so important, especially if reality is bunk, anyway? Do this thought experiment:

Step 1: Choose a situation in your life, where someone made you really angry. Angry, not devastated; no murders etc.

Don’t read on until you’ve chosen. “Person A did X, and that really pissed me off.”

The night before the event, psychotic P, wild-eyed and drooling, broke into A’s house, and took his/her entire family, the spouse, the kids and the dog hostage. P raved: “<insert your name here> is my arch-enemy. I live only for revenge. Unless you do X tomorrow, I will blow up this house with everyone in it.” Here P opens his shirt and shows explosives. “I will watch you with this…”

Step 3: If this was true, how would you feel towards A? Still (as) angry?

If you feel exactly the same: you’re cheating. You are not truly imagining the situation where a raving lunatic is holding your nearest and dearest hostage. Unless of course you’re a raving lunatic yourself. In which case: have a nice day. And please forget me.

Step 4: If your anger is caused by A’s action, why can any explanation of their behaviour change that emotion?

Answer: if your emotion was caused by A’s actions, it wouldn’t change, no matter what the explanation was. But it isn’t: it’s only triggered by the action. The root cause of your anger is the idea that A could have acted differently, and they deliberately chose to act this way…grmbl, grmbl…probably just to annoy you… 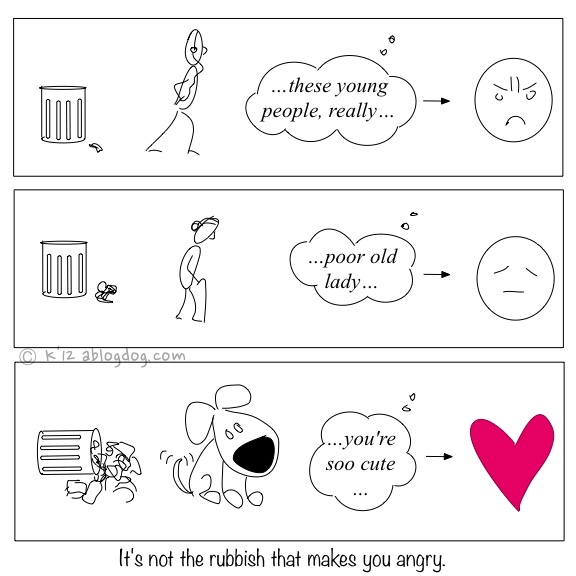 But just because it would make life so much nicer to think there’s no free will, that doesn’t make it true, does it?

You’re right, it doesn’t make it true. Actually, it’s not true or false. There’s no objective truth to the existence or otherwise of free will, because it’s not an objectively definable thing. We cannot bathe in the same river twice etc. It’s something you choose to believe or not.

The above is a reason to choose not to believe. Not in free will, or good & evil.

But can I just choose to believe that?

It’s not really belief. It’s allowing the idea to become familiar, and to sit comfortably in your world. You can start by inviting it in for tea… You can think about it for a bit. You can do the thought experiment above a few times (very good as for calming down after getting angry). You can start getting used to the idea that “everyone is doing their best”.

Hey, you’re contradicting yourself, I can’t choose anything by your lights.

Well spotted! I don’t think you will be choosing (consciously). Either your emotions are sufficiently engaged to make you want to do this, or they’re not. I was just giving you some ideas on what are good ways of going about it, if you do want to do it. And trying to give your emotions a little push too: it’s easy… it can be fun!

And it makes life so much better, I can’t begin to tell you…